As the NFT bubble continues to grow, another application has entered the crypto metaverse: BitClout, a social crypto-network where people can buy and sell tokens (Creator Coins) based on a person’s reputation. BitClout is a decentralized social media platform (sharing similarities with Twitter) that functions on a blockchain (like Bitcoin) with no central owner. BitClout’s primary mission is to create a new type of social network; a social network that lets you speculate on people and posts with real money. BitClout is unique from other social media platforms because it has pre-loaded thousands of the most popular Twitter users into its network and allowed trading on those users even without their permission. This signature feature has led to more interest and faster adoption of the platform, but inversely, it has also opened BitClout up to attacks from critics on its ethical implications. For the first time ever, you can invest in yourself and your favorite influencers with real money through the use of Creator Coins.

How to Buy BitClout

The BitClout blockchain has its own cryptocurrency (BitClout) that you can use to do all kinds of things on the platform, including buying a new type of asset called Creator Coins (discussed below). Anyone can buy the BitClout cryptocurrency with Bitcoin through the app’s built-in decentralized exchange. 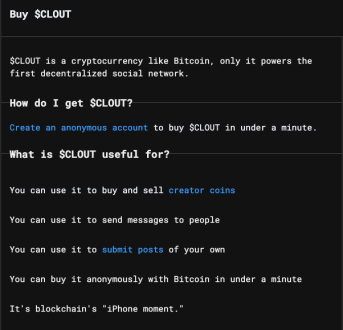 What are Creator Coins?

On the network, NFTs are called Creator Coins and they represent a popular identity. The value of the Creator Coins relies entirely on the celebrity's popularity, meaning that the value can also rise and fall depending on the celebrity’s actions. Every profile on the platform automatically gets assigned its own unique coin, freely tradable on the open market. As people buy the coin, the price rises, and as people sell, it goes down. So if you think a coin is going to become more popular then you will probably make money if you buy it early. In order to buy a creator coin, you must have a certain amount of BitClout, discussed above, in order to buy the desired amount of that coin. Currently, the only way users are able to monetize their presence is through what BitClout calls “founder rewards,” which are essentially a tax on purchases of a user’s coin. Every profile allows the creator to keep a certain percentage of the coins that are created as a “founder reward.” For example, if someone sets their founder reward percentage to 10% and then someone buys 100 BitClout of their coin, then 10 BitClout would go to the creator’s wallet rather than the purchaser’s. If a founder sets the percentage too high it can discourage potential buyers, but owning your own coins can also help push the value of your own Creator Coins up. Every profile on the platform gets its own coin that anybody can buy and sell, and you can have your own coin too simply by creating a profile. To buy someone’s coin, you must navigate to their profile and hit "Buy." You can find someone’s profile either by searching for it or by visiting the creator coin leaderboard (shown below). Profiles for the top 15,000 influencers from Twitter have been pre-loaded into the platform, meaning that you can buy and sell their coins even though they’re not on the platform yet. These “reserved” profiles have a “clock” icon next to their names, indicating the owner of the profile has not joined yet. This is one reason why some people accuse BitClout for being a scam and being unethical (more on this later). However, the owner of a reserved profile can claim their profile by navigating to their profile and hitting a button to tweet their BitClout public key (shown below). When they do this, they gain full access to the account, as well as a percentage of the creator coins associated with their profile (founder rewards--discussed above). The creator then receives a blue check mark next to their account name and can begin earning a percentage of the profits from the Creator Coins associated with their name. Only the owner of the Twitter account associated with a reserved profile can claim it. 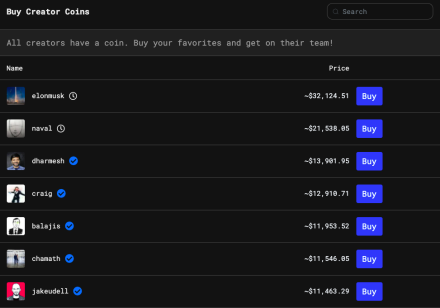 Creator coins have many practical uses and can be used for a variety of purposes. For example, a creator can make it so that only people who own a certain amount of their coin can participate in the comment sections of their posts. Other perks of owning your favorite influencer’s creator coin are to be able to receive some sort of special giveaways or participate in special meetups. This forces anyone who wants to have a voice in that creator’s content to first align themselves with the creator by buying their coin, thereby reducing spam. This, by default, would create a lot of demand for one’s coin, thus driving the price of it even higher. Also, people who own a certain amount of a creator’s coin get access to special content. Or, alternatively, people must pay a monthly subscription in the form of the creator’s coin in order to get premium content. Creators can also use their coins to distribute scarce resources to the largest holders of their coins. This incentivizes people to buy and hold the coins of the influencers whom they want to interact with most (driving up the price) in order to get a chance to speak with them. Since BitClout is such a new phenomenon, these are all speculations of the potential uses of creator coins in the realm of BitClout.

BitClout is still in the very early stages of development, and thus the market is still evaluating the use-cases for people’s creator coins. Furthermore, at the moment, Tesla CEO Elon Musk has the most expensive Creator Coin, coming in at around $30,000. The Creator Coins gain or lose value depending on how many people buy coins associated with the profile, as there are between 100 to 1,500 coins in existence for each profile. One creator who hasn’t claimed her Creator Coin is Ariana Grande. According to BitClout, users have already spent the equivalent of $2.27M purchasing her coin. While Ariana Grande will be able to claim her account and the founder rewards associated with that, those rewards will only be a percentage of the total amount users have spent on “Ariana Grande coin” (currently valued at about $1M). The other $1.27M of value in Ariana Grande’s coin will be locked into the profile as BitClout tokens belonging to other users. Currently, there is no way to exchange BitClout back to Bitcoin so the rest of this value remains locked into the BitClout system and under the control of its developers.

Ultimately, the value of a Creator Coin is tied to the person or corporation behind it. A bet on a coin is putting trust into that person that they will be a good actor and deliver value to their coin holders. However, many people speculate BitClout to be a scam. Some may argue that the only way to participate is by exchanging Bitcoin for BitClout. With that BitClout you can buy Creator Coins. Now, your money is buried two levels deep into BitClout’s ecosystem, and there is no way to change BitClout back into Bitcoin. The founder of BitClout is anonymous, but goes by the pseudonym “Diamondhands.” Of course, the problem with anonymity is that it leads people to believe that there is something to hide. In my opinion, it’s too early in the game to tell whether BitClout is a scam, and there’s too much activity for BitClout to just be a scam. Nevertheless, more investigation is required.