“45 44 Burnt Out” reads a sign placed in front of Kanye West’s childhood home in the Chicago suburbs. West’s home, which he recently reacquired and is planning to renovate, was vandalized by fans of Drake about a week after the rapper labelled West a “burnout” in a poem. The first presentation of DONDA in its final form came the day the signs were placed in front of his home; West finished his show by lighting himself on fire in his reconstructed Chicago home at Soldier Field and walking out to greet the crowd. 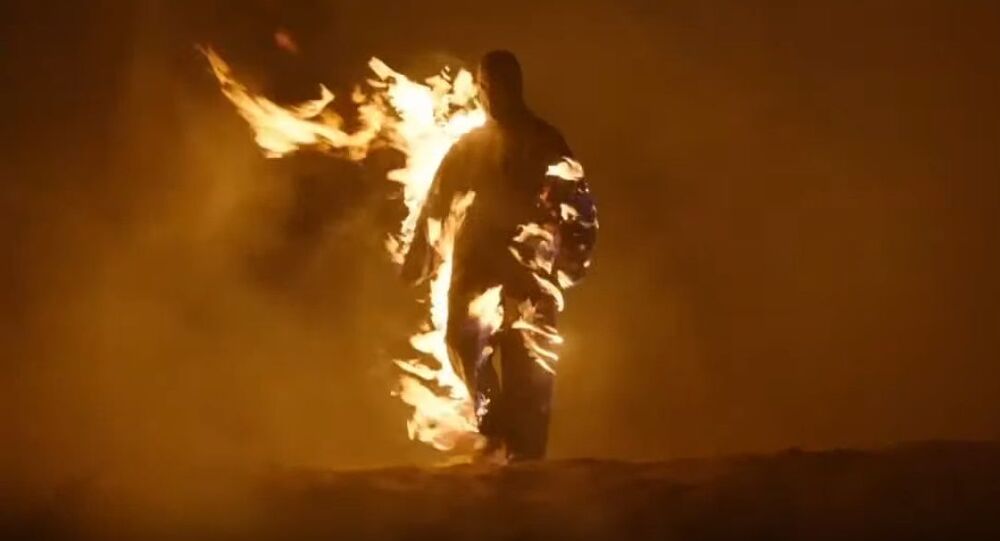 While the fire was a clear shot back at Drake, it symbolizes more than a feud between two rappers. He displays his connection with God through fire as a symbol of the Holy Spirit. His exit from a room in his house completely engulfed in flames represents the tenacity of his home to have survived all these years. Most importantly, it indicates that Kanye West has returned, as his most unstable, creative, and perfectionist self.

Since The Life of Pablo, West has released the seven-song albums Ye and KIDS SEE GHOSTS, albums with great flow and powerful lyrics that seemed short and unfinished and that had more potential than what was released. He released Jesus Is King, the record that turned half of his own fans away from him because of its indication of how deep he had dug into the realm of religion and how large that portion of himself became. It was released in the midst of his Sunday Services almost as a means of appeasing his fans, who demanded songs sung and written by West himself rather than his newly formed choir. DONDA ameliorates the errors of every record since TLOP while providing a crystal-clear view of the fears, obsessions, and stimulants of the man who can give everyone in the world a dollar. West tells his new story with God, reminisces about his past, remembers his mother, comments on the culture of today’s world, and reaffirms himself as one of the most musically and lyrically intelligent artists of the generation in this hour-and-forty-five-minute masterpiece.

“Donda Chant” as well as the name of the record gives a false pretense to the album as a whole; it is not about his mother. He returns to the recordings of his mother’s voice several times throughout the record, but, in a 27-song album, at least 60% of the tracks should have something to do with the title. West has never truly recovered from the tragic loss of his mother; the name could have arisen from purely wanting one of his best works to be attributed to her.

“Jail” tells the story of the spiritual prison West endured during and after his divorce with Kim Kardashian. The rough and restrained (while still aurally beautiful) autotune on West’s voice throughout the song suggests his feelings of imprisonment, not only spiritually in his divorce but also in his work at the Hard Rock stadium, in which he set himself up in a studio that resembled a prison cell. The calming voice of JAY-Z makes reference to some of West’s past episodes, recalling his support of Donald Trump and his referring to himself as a god. Pt 2 of this track features Dababy in JAY-Z’s place, the former commenting on his fall from grace after a series of comments he made were considered insensitive. Both JAY-Z and Dababy commence a trend in the album: the war on cancel culture.

West reunites with the Weeknd on “Hurricane.” The angelic chorus sung by the former accompanied by one of West’s most revealing verses combine to form the hurricane that this track is. West’s verse reflects on the irony of his life, discussing that he dropped out of college and still became one of the most successful people, that he went insane although he makes beautiful music, and that he built a beautiful 60 million dollar home that he never lives in.

“24” sees a return of West’s Sunday Service Choir. Their perfectly harmonious hook accompanied by ceremonious organ music set the stage for West to tell the story of his mother’s untimely death ultimately inspiring him to become a better person, reborn through Christ as a man who sees but one way forward.

West speaks on his distancing from worldly pleasures and fake advertisements on “Heaven and Hell.” He describes the minimalist approach he has begun to take in life, doing no promotion for DONDA other than hosting listening parties in stadiums once every two weeks. The album cover’s blackout indicates West’s hope for the attention to turn purely toward the music and away from unnecessary extravagances.

“Lord I Need You” is an emotional rollercoaster for West. He begins by explaining his deteriorating relationship with his ex-wife, questioning where she goes and how long she takes to drive from Palm Springs to her home in Calabasas. With his relationship failing and four kids to support, West turns to God, the one person he feels he can trust, just as things look up. The mother of his children arrives at his listening parties to support him when he needs it, and he remains thankful that he can have a good relationship and keep his family intact.

“Come to Life” leaves West in a good place. He no longer is allowing his ego to stand in his way, allowing his daughter North to own Nikes after his famous dispute with the company before the release of TLOP. His career is coming back to life with the release of the record, as well as his relationship with his ex-wife. During this song at his Soldier Field listening party, West lit himself on fire and shortly brought out Kim Kardashian in a wedding dress. Counting on God worked out for West, and he makes it known on this track with stunning singing and a beautiful piano piece like never before.

That Kanye can mean so much with such perfection in his lyrics, instrumentals, and vocals speaks to his returning prowess as a musician. DONDA firmly stands as one of his best works, rivalled by TLOP and Graduation. More importantly, the record stands out against the typical 2-minute radio songs dominating today’s music industry and does it in a way that proves longer pieces can still captivate the minds of many if they are made properly.